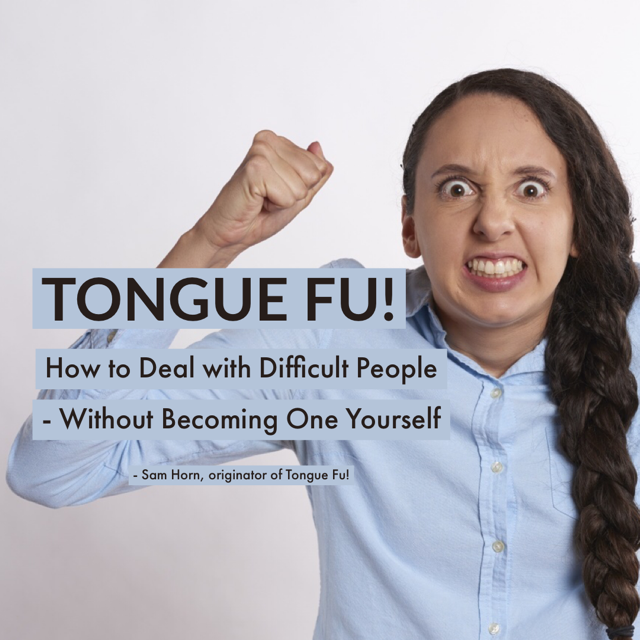 It’s ironic, isn’t it? We’re taught math, science and history in school; we’re often NOT taught what to say when dealing with a challenging person or sensitive situation.

Want good news? It’s not too late. From now on if you don’t know what to do, Tongue Fu!®

What’s Tongue Fu!®? It’s a trademarked communication process I developed more than twenty years ago. It’s a series of “martial arts for the mind and mouth” techniques for what to say – when we don’t know what to say. I introduced these diplomatic, proactive responses in a book that’s been published in 17 languages and taught to hundreds of organizations.

In fact, I was on a plane on my way to do a TV interview and wanted to check a quote in the book. I took out my copy from my purse. A woman across the aisle took one look at it, YANKED it out of my hands and said, “That looks interesting. Tell me what it’s about.”

I said, “Well, it’s how to deal with difficult people without becoming one ourselves.”

She laughed and said, “Ohhh, I wish I’d had that book on the plane before this one. I was seated next to the most obnoxious man. I could have used your book, I would have HIT him with it.”

Well, that is NOT what Tongue Fu!® is about. It’s not about getting back (or hitting back) if someone’s being unfair, unkind or inappropriate. It’s not reacting and saying what’s on the tip of our tongue (which almost always makes the situation worse.)

It’s about holding our tongue and responding to stressful situations and difficult people with responsible, respectful words that have the power to turn conflicts into cooperation. It’s about keeping our cool and being a class act – even when other people aren’t.

Here are five of my favorite Tongue Fu!® tips. Hope you find them useful.

When people complain, don’t explain, Take the AAA Train. Explaining why something went wrong or wasn’t done makes people angrier because explanations come across as excuses. Instead, Agree, Apologize, Act. “You’re right, Mrs. Smith, we were supposed to send that material to you last week, and I’m sorry you didn’t receive it yet. If I could please have your email address again, I’ll personally send it over right now.” Voila. Complaint over!

Whatever you do, don’t defend or deny untrue accusations. If someone says, “You women are so emotional!” and you protest with, “We’re not emotional!” you’ve just proven their point. Instead, put the conversational ball back in their court with, “What do you mean?” Asking an accuser to explain him or herself will cause them to reveal the real issue and you can address that instead of reacting to their attack.

Imagine someone claims, “You don’t care about your patients.” Protesting, “That’s not true. We do too.” turns this into a back-and-forth “Yes we do – No you don’t” debate.

Instead ask, “What makes you think that?” She may say “My appointment was a half hour ago, and no one’s told me what’s going on.” Aahh, now you know what’s really bothering her, You can thank her for bringing this to your attention, apologize for the delay, and let her know the doctor will see her now vs. debating whether you care about your customers.

Tongue Fu!® Tip #3: “What can I say if people are blaming, shaming, fault-finding?”

Halt what’s happening with a hand gesture. No, not that one! If people are arguing and you try to talk over them, guess what will happen? They’ll talk louder. The voice of reason will get drowned out in the commotion.

Instead, put your hand up like a traffic cop. This universal sign to STOP will cause them to pause for just a moment, which gives you a chance to get your verbal foot in the door.

Then say these magic words, “We’re here to find solutions, not fault.” Quote John F. Kennedy, “Our task is not to fix the blame for the past, it’s to fix the course for the future.”

If people start pointing fingers again, make a T with your hands and call out, “Time out. Calling each other names won’t help. Throwing each other under the bus won’t fix this. Instead, let’s focus on how we can keep this from happening again.”

Use the empathetic words, ‘I wish,’ or ‘There’s something’ to let people know you’re trying to help. Say, ‘I wish I could bring out the sunshine for you. I know you were looking forward to some beach time’ or ‘I hope it clears up soon. In case it doesn’t, here’s a list of rainy-day activities so you can make the most of your visit even if the sun doesn’t cooperate.'”

We can’t always give people what they want. If we have to deliver bad news, we can at least offer options vs. shrugging our shoulders and giving the impression we don’t care.

Imagine a customer asks, “Can we be seated early? We’re going to a movie and only have 45 minutes” and you say, “No you can’t because we’re full and don’t have any empty tables.”

That’s the truth, and that customer will get upset because he feels you’re brushing off his request. The words “can’t because” are like a verbal door slamming in people’s face.

Instead, reword your response to “Sure you can, as soon as” or “Yes you can, right after.” “Yes, we can seat you early. That couple are paying their check, and we’ll seat you there as soon as they leave and we have a chance to clean their table.”

A single mom told me, “I can’t wait to use this idea at home. My kids see me as a ‘big meanie’ because I’m always telling them ‘no.’ Next time they ask if they can go outside and play with their friends, instead of saying, ‘No you can’t, because you haven’t done your homework,’ I’ll say, ‘Sure you can, as soon as you finish your homework.’ Instead of me being seen as the one blocking them from what they want, now they are responsible for getting what they want. It changes the whole dynamic of our relationship.”

Want more communication tips? Check out my books here – or contact Cheri@IntrigueAgency.com to arrange for Sam to speak for your organization or to get certified to teach these techniques.

Sam Horn – CEO of the Intrigue Agency and originator of Tongue Fu!® – is on a mission to help people create the life, work and relationships of their dreams. Her TEDx talks and books have been endorsed by Tony Robbins and featured in NY Times and on NPR. 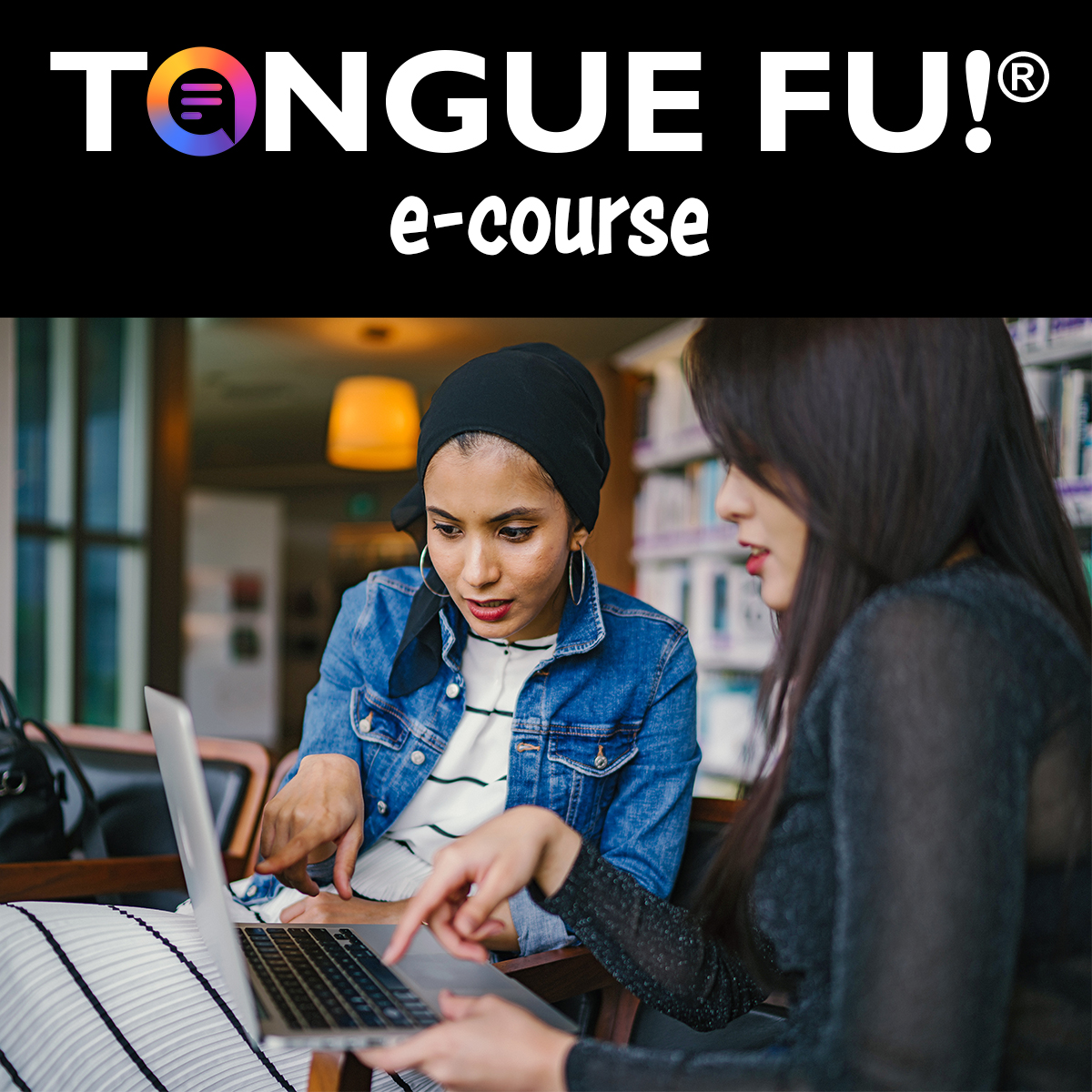